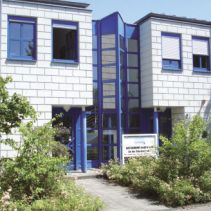 The development of LUX ELEMENTS started in the practical world of the Lux tile specialist. The daily demands and tasks in installing tiles were a part of all deliberations from the word go. Today LUX ELEMENTS has an excellent name for itself and today it no longer stands for a single standard product but for a mature range of technical systems of hard foam support elements

The company was founded in Radebeul, Saxony as a tiling company. Tradition usually stands for endurance, experience and respectability. We can readily identify with these qualities and fully support the basic principles of the tiling trade. Being able to apply the know-how from the past in the present and recognising opportunities for the future form the basis for innovation.

Move to Leverkusen. Commercial freedom is the prerequisite for progress.

Handing on the business from father to son. This family business is now in the hands of the second generation. Maintaining traditions and guaranteeing the future.

LUX ELEMENTS in Europe. Export activities expanded. Offices set up in France and the Netherlands, product names internationalised, and products divided into groups and systems.

Shift from having foam supplied to producing own. We have set up our own production facility in Ungersheim, France for expanded polystyrene hard foam, which does not use CFC, HCFC, HFC or CO2 fuels.

The LUX ELEMENTS program is experiencing great recognition throughout Europe. Therefore, constant increases in capacity are necessary. The Leverkusen plant has been significantly enlarged a number of times.

LUX ELEMENTS will open its own exhibition premises in a building, especially designed to meet the purpose of exhibitions. The new building will also include training rooms.

Europe-wide start of the LUX ELEMENTS campaign “The original can do!”

LUX ELEMENTS is celebrating the 30th anniversary of the construction panel. The product – also known as “The Original“ – was patented in 1981 and has proven itself in practice ever since. 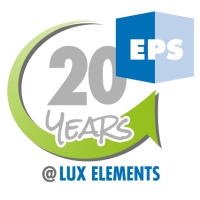